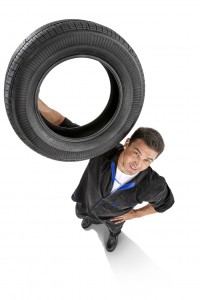 Buick subjects tires to extensive testing before they go on any model, including the Buick Enclave.

When it comes to the Buick Enclave, engineers left no stone unturned in an effort to provide the perfect balance of performance, grip, and fuel economy.  The tires on the 2011 Buick Enclave luxury crossover may look nice on the road, but they went through a lot of abuse to prove their performance, durability and safety before being chosen. At General Motors’ Tire-Wheel Systems Lab on GM’s Milford Proving Ground in Michigan, a team of more than 50 engineers tested numerous contenders to be the tires every Buick Enclave wears as it leaves its factory in Lansing, Michigan.

“Tires are the only contact point you have with the road,” said  Tire Engineering Group Manager Dave Cowger. “Your tires influence everything from fuel economy to steering and handling, road noise, and braking. So we beat the heck out of these tires in the lab to make sure they have the right traction, fuel economy, durability and other characteristics.”

Utilizing tires that produce little road noise is a key component to Enclave’s library quiet interior, which allows passengers seated in the third row to hear a conversation between first-row occupants without interference. Enclave is the only crossover in its segment equipped with QuietTuning, Buick’s exclusive engineering process to reduce, block and absorb unwanted noise from entering Enclave’s cabin.

Many major tire manufacturers sent members of their staff to join in the abuse of tires trying to become standard on the Buick Enclave. Each tire vying to be chosen for the Enclave went through 25 different tests in a laboratory setting to gauge how well they hold up against simulated real-world abuses such as hitting a curb at low speed or smashing into a pothole.  Dynamometers with a special type of sandpaper are used to simulate tens of thousands of miles of wear from driving, allowing Buick engineers to test tires to the point of failure in a safe, controlled manner.

Only after surviving the battery of lab tests do tires migrate to the test track where they are put through further punishment. Out of dozens of tires submitted for consideration for the Enclave, only two tires from Michelin and Bridgestone passed all the tests to become standard equipment on the Buick Enclave’s 19-  and 20-inch wheels, respectively.

Since the formation of GM’s Tire-Wheel Systems team over 40 years ago, the group has tested more than 20,000 tire constructions. Buick uses Tire Performance Criteria (TPC) markings on the sidewall of the tire, which serve as a “seal of approval” for tires that meet or exceed GM’s stringent tire standards. To earn the TPC marking, tires must deliver exceptional results covering traction, handling, noise, endurance, tread wear and other factors.

Jim Hudson Buick is the #1 Buick dealership in South Carolina, serving the midlands including Columbia, Sumter, Newberry, and Orangeburg with a commitment to complete customer satisfaction before, during, and after the sale.  Jim Hudson has been serving the Columbia area for over 30 years, and has been voted Best New Car Dealership ten years in a row and counting by readers of The State.  Jim Hudson carries a great selection of Buick Enclave luxury crossover SUVs, as well as replacement tires installed by Buick Certified Service Technicians.  Jim Hudson Buick is located at 7201 Garners Ferry Road in Columbia, and can be reached by phone at (888) 377-4971 or by visiting their Buick Enclave Columbia SC website.