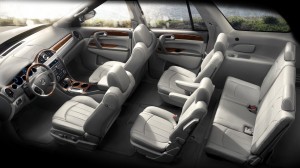 The 2011 Buick Enclave offers seating for up to eight in a gorgeous, well-appointed interior.

When shopping for a new luxury SUV, many Columbia, South Carolina drivers are looking to the 2011 Buick Enclave for its mix of premium interior design and smart features. Buick did the numbers and gave Enclave three rows of first-class seating for up to eight—something not found on any competing luxury crossover. SmartSlide second row seats are designed to slide forward with the pull of one lever, allowing easy entry and exit for those in the three-passenger third row seat.

Choosing the Buick Enclave means that plenty of storage space also comes along for the ride as well. The second and third row seats fold flat with easy-to-reach latches to create a level load floor, freeing up 115 cubic feet of storage–room for enough food to fill five full- size refrigerators for your next dinner party. With the third row down, you have 65.9 cubic feet, plenty of luggage space for a family of four. And with both the second and third rows up, you still have 23.3 cubic feet behind the third row for that end table you just have to have.

On top of plenty of leg room below you and cargo space behind you, Enclave offers lots of wide-open space up above. An available power sunroof and companion 3-foot by 4-foot skylight allows you to bring in the outside to spread light throughout Enclave’s spacious interior. The sunroof in the front row tilts up or slides open while the fixed skylight above the second row offers a sunshade to control all those rays. It’s the closest to open-air driving that an eight-passenger crossover can get.

In the 2011 Buick Enclave, every seat feels like a reserved seat.  Take the driver’s, for instance. Beyond its warm camphor wood tones and brushed aluminum easy-to-glance gauges, the driver’s seat in Enclave is command central. The genuine mahogany-inlaid steering wheel places buttons for cruise control, speaker volume and Bluetooth® at your fingertips, keeping you in total control while your passengers can enjoy the comforts that can only result from 1,400 hours of real-world evaluation.

French-stitched seams highlight available leather seating surfaces infused with silk and perforated for breathing and sound deadening. The driver and front-passenger seats are both heated and cooled on CXL-2 models, while both CXL models feature an eight-way power driver’s seat with two memory positions.  Even on those rare occasions where you decide to let someone else drive your Enclave, one press of a button puts everything back as you like it.

Jim Hudson Buick is the premier Columbia Buick dealer.  Jim Hudson acquired its Buick franchise from Hancock Buick in 2007, joining a healthy GMC franchise, and is proud to serve both old and new Buick drivers alike with a commitment to complete customer satisfaction.  Columbia drivers have noticed, voting Jim Hudson the Best New Car Dealership in The State’s annual Readers’ Choice poll for ten years and counting.  Jim Hudson Buick can be reached online at their South Carolina Buick Dealer website, or by phone at (803) 783-0110.